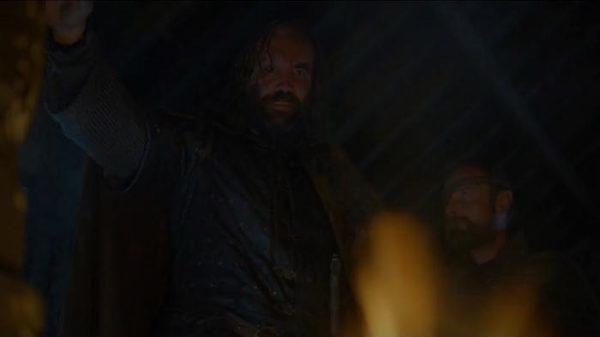 Season 7 episode 1 of Game of Thrones has happened! Besides, has the series just given us clues about the identity of Azor Ahai?

Game of Thrones never leaves anything to chance and that, the fans have understood it well with the years. One of the characters who had the most time on the screen in the first episode is surprisingly the Limier, and his scenes proved important both in the development of his character but also certainly for the continuation of the ” plot. Besides, we were back on the details of a key scene concerning his character in episode 1 of season 7 of Game of Thrones, on melty. Today, it is time to take an interest in the second part of his plot. And, in particular to this vision he has in the flames after Thoros asked him to take a closer look at them. After this scene, many fans began to think that Sandor Clegane could be the reincarnation of Azor Ahai.

For those unfamiliar with the story of Azor Ahai, he was a longtime Westeros warrior who had forged a flaming sword called Lightbringer (“Illumination” in French) to which he gave his Power by plunging it into the heart of his wife, Nissa Nissa. Many believe that Azor Ahai will return and that he reincarnated in one of the heroes of the series. If some think it is Jon Snow, especially as a result of his return to life, the eyes are now turning to Sandor Clegane. On the one hand, it is true that the Limier has a special history with fire, since his brother burned him when he was a child and it would be interesting to see him finish with a burning sword.
The clues that suggest that this could be him the reincarnation of Azor Ahai also come from the fact that he is considered to have returned to life several times. The first time child after the burns of his brother and the second time when he was left for dead by Arya. Some even think it will be by killing his brother, Gregor Clegane, that he will complete the prophecy as when Azor killed Nissa Nissa. On the other hand, some points do not really stick with his character, like the fact that he has no connection with the dragons and that he was not born under a bleeding star either.

The series would have really made a surprising choice by choosing the Bloodhound as the reincarnation of Azor Ahai but, for the time being, this theory does not seem to hold the distance when examining all the points and Jon Snow, in particular, remains a better candidate . Nevertheless, the story of Azor Ahai aside, Sandor’s vision in the flames remains an interesting premonition and still leaves to think that his character will have his role to play – as seem to believe Thoros and Beric also. While waiting to learn more about the role of the Bloodhound in future episodes, we propose you to discover what awaits you in episode 2 of season 7 of Game of Thrones.