Homosexual Parents : no influence on the behavior of children 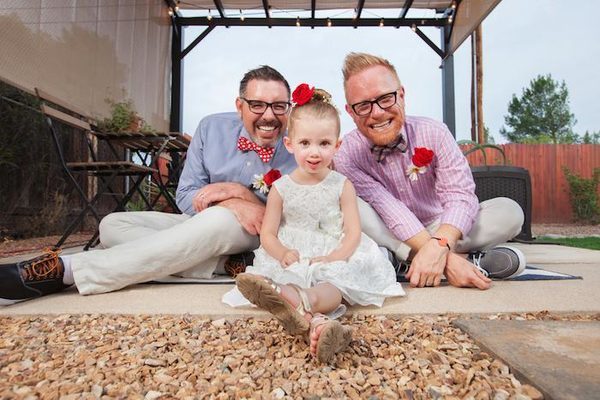 Children raised by homosexual parents have a identity gender changed ? The question has often been raised, sometimes instrumentalized by the opponents of marriage for all. Is wrong, obviously.
According to a study conducted on 106 couples who adopted a child and published in the journal Sex Roles, there would be no difference of identity regarding gender between the children of same-sex couples and those raised by heterosexual parents.

In reaching this conclusion, the authors, from the University of Kentucky, have followed same-sex couples (gay and lesbian) and heterosexual parents and their children for ten years. The children were interviewed and their behavior has been analyzed by researchers, whereas previous studies had focused on questioning the parents, not the children themselves.

The authors have reviewed several criteria to evaluate the adoption by children of the social norms of the genre. Among these criteria are the choice of toys, clothes, or career ambitions.

However, the results show that the sexuality of parents has no influence on the way in which the child constructs his gender identity. For example, the little girls of gay and lesbian couples played mostly with dolls and boys with trucks, the image of the children adopted by heterosexual parents. Hard to say if this is to be welcomed, this is not the about the study.

In any case, the few children who manifested behaviour consistent with their gender before entering school were also those who sought, a few years later, to careers less typical of their gender. This shows that the choice of toys is an indicator rather irrelevant to the way in which the children identify with the social norms of the genre, the researchers explain.

A matter of education

“The sexual orientation of parents and the family structure had no significant impact on the compliance or non-compliance of the children to their kind, the authors write. Our results suggest that the development of gender identity among children adopted by parents of lesbian or gay takes place according to the usual ways, and is similar to that of children adopted by heterosexual couples “.

Thus, ” the fact of having a female model and a male in the household does not necessarily facilitate the development of an identity that conforms to gender in adopted children, any more than it discourages non-compliance to the genre.”

In addition, the authors explain that the previous works that have concluded that a change of gender identity in children who have been raised by cuts homosexuals manifest some bias. They have in fact focused on the families ” non-traditional “, whereas the latter work was carried out within the couples incomes, from the middle class and rather traditional. This implies that the gender identity is more a matter of education as well as sexual orientation.