In Bangladesh, “the man tree”, which is thought to be cured has a relapse 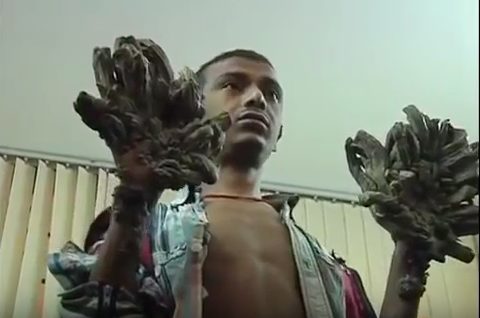 With épidermodysplasie verruciforme, a genetic disease rare that covers his hands and feet huge wart like tree bark, the Bangladeshi Abul Bajandar has attracted the interest of newspapers around the world in 2016. The one that was nicknamed “the man tree” had been declared cured at the end of 24 surgical operations. But then his doctors praised the success of their intervention, the disease has recently surfaced on his hands and his feet. “We thought we had succeeded, explains to the AFP Samanta Lal Sen, coordinator of plastic surgery at Dhaka Medical College Hospital. But it now seems that this will be a patient who will take time”.

In the past two years, Abul Bajandar was pulled almost five pounds of outgrowth, which was prevented from working and take care of his little girl of four years. This week, there has been a 25th intervention to remove the bulk of new warts appeared on his hands. Fascinated by his illness, the hospital of university of Dhaka has agreed to treat him free of charge. “We are grateful for the free treatment, we would not have had the means to pay for it”, he declared to the AFP. Abul Bajandar lives in a small room of the hotel with his family and is desperate to be able to return to a normal life : “I’m afraid I still operations. I don’t think my feet and hands will recover one day.”

The épidermodysplasie verruciforme, or syndrome (Lutz-Lewandowsky, is a skin condition extremely rare. Only about five people have been diagnosed worldwide, according to Ms. Sen. They have a particular sensitivity to the hpv and develop warts scaly, especially on the areas of the body exposed to the sun and to the extremities, particularly the hands. As these warts look like bark, and the patients are nicknamed “men-trees.’ In 2017, the hospital had also picked up a girl of ten years achievement of the same disease, the first case in the world of “woman-tree”.