India : a man plays the guitar during brain surgery 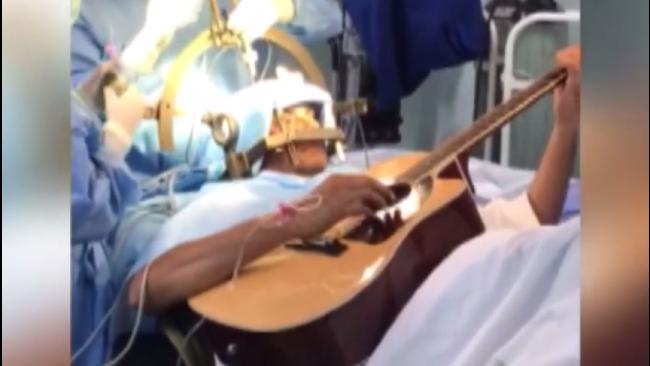 Operations on the brain are, in themselves, already captivating. Add to that the fact that the patient is awake and can talk during any intervention, and they become fascinating. Then if, in addition, the patient is a professional musician and plays the guitar…

“I found it fantastic to see the improvement almost magical movements of my fingers, and this directly on the operating table,” said Abhishek Prasad. The musician indian 37-year-old has been operated on to treat a dystonia of the hands, a pathology that appears in musicians and that causes contractions and spasms, involuntary.

“At the end of the intervention, my fingers were healed to 100 %, and I could move like before, he added. Three days later, I am released from the hospital and I was ready to play again. “

#WATCH: Bengaluru man plays guitar as doctors operate on his brain at a city hospital. pic.twitter.com/F9N2Ifp9lU

Since a year and a half, Mr. Prasad was suffering from cramps while playing the guitar, in the middle finger, ring finger and little finger. Dystonia of the musician appears when the movements are very precise are repeated. It can act on the hands with the guitarist, for example, or at the level of the muscles of the mouth in a trumpet player.

After a wandering therapeutic, a neurologist identified the problem nine months ago, and has directed the musician to the neurosurgeon of hospital of Bangalore (India), which was finally operated on, Dr. Sharan Srinivasan.

“This is a procedure during which the part of the brain that triggers the tremor is destroyed,” he says. Before you begin, a special bracket has been secured to his head by four screws inserted deeply in the skull “.