Orphan Black season 5: Episode 4, the origins of the monster unveiled, our review 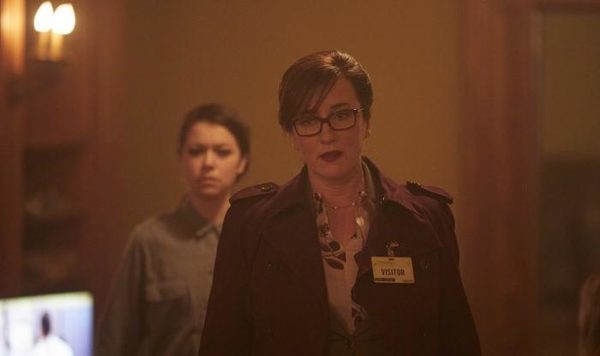 Last night, episode 4 of season 5 of Orphan Black was broadcast on BBC America. It’s time to discover our criticism of “Let the Children and Childbearers Toil” and the promotional video of episode 5!

If last season Episode 3 of Orphan Black’s season 5 was centered on Alison last night, it’s a return to the roots that was proposed to us in episode 4. There have been many revelations in ” Let the Children and Childbearers Toil “, to which we did not expect to receive answers immediately. It was an episode full of surprises and what it feels good! Some of the secrets of Neolution were drilled to date and it was quite sought after. The screenwriters kept us going from start to finish and Tatiana Maslany’s performance was still as grand. In addition, science was more than ever at the heart of this episode 4 of season 5 of Orphan Black which revealed some information about the debut of Neolution …

Rachel was always with P.T. Westmoreland and we discovered her hidden lab. Moreover, we have obtained revelations about the very first attempts of the scientist to repel human evolution. Moreover, the “thing” in the woods is actually a human whose experience has been erroneous. Siobhan also played an important role in episode 4 of season 5 of Orphan Black. His little trip with Sarah was pure happiness and their duo always works perfectly. Their number to get Dr. Elizabeth Perkins’ wallet, as well as her identity, was done brilliantly and had the touch of humor and lightness that the series needed. It was learned that this famous doctor had to meet a certain Alex Ripley, former member of Neolution, detained against his will in a psychiatric hospital. Obviously, Sarah and S. went there and it was discovered with amazement that it was Virginia Coady. This little wink to season 3 proves that this chapter of Orphan Black is the ultimate season of the show, which makes us a bit nostalgic!

It was thanks to Virginia that we got the answers about Neolution’s first failed experiment. She was hired by Susan and P.T Westmoreland but they went too far. She explained that they had created a “monster” when it was only a simple child. Science can actually do horrors. In addition, Susan returned to the show. No, Rachel did not kill her and we have no doubt that her character will play a key role in future episodes. Susan and Virginia were not the only ones to be reinstated in the show, as Felix’s sister was also back! Moreover, Sarah found Helena and the reunion between the sisters was full of emotions. This episode 4 was one of the best this season 5, mixing beautiful surprises with fascinating revelations. The sequel promises to be just as intense, moreover, the episode 5 promo video, which you can find above, announces the color! The tension will be present. While waiting to find “Ease For Idle Millionaires”, discover the spoilers of the week!