Pretty Little Liars Season 7: A spin-off already on the way? This is precise! 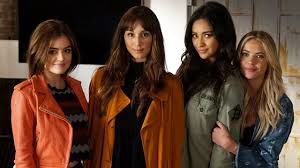 Whilst Pretty Little Liars has recently gone out of his way, a spin-off could be born much sooner than imagined!

A spin-off already on the way? Yes, the meltynauts, if Freeform’s most famous show recently ended on the cable channel, the final scenes of the Series Finale were clearly meant to teaser a spin-off. But then, does Marlene King already have this project in mind? While Melty’s editor suggested discovering Janel Parrish’s confidences about the end of Season 7 of Pretty Little Liars, the executive producer of the series recently confided in an interview with Observer . And the least we can say is that a sequel could very well land in the coming months.

Indeed, when the journalist confided that he had the impression that the story of Addison had just begun and that he was wondering about the possibility of a spin-off on a new generation of Liars, Marlene King was much more confident than we imagined: “I’m going to use an emblematic reply from Alison to answer: get ready!” This is an answer that should please the fans of the first hour. One thing is certain, we are not very sure that we want to discover a spin-off based on other liars. But who will live, see! While waiting for more info, do not forget to vote every day at the 2017 World Cup.