Regina (Once Upon A Time), Lagertha (Vikings), Stephanie (Grey’s Anatomy) … Who is the most badass? 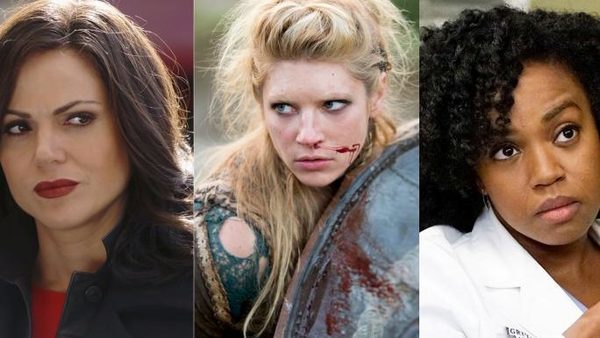 There are still a few days left to vote for the quarter-finals of the World Cup Series. Here then the most badass female characters of the series still in competition!

While on Wednesday we were offered to discover the most badass male characters of the series still in competition like Rick of The Walking Dead or Damon of The Vampire Diaries, it is time to pass to the female characters! Yes, the competition continues to rage and know that you can always vote to defend your favorite series or series by going on the voting platform here, or via social networks Facebook and Snapchat. And to help you in your choices, we present you our small selection of female characters who stand out for their courage and strength of character in the series still in competition. Moreover, do not hesitate to share with us other women that you find totally badass in the series.
Sasha – The Walking Dead
Courage is also knowing how to sacrifice oneself to protect one’s family and the greatest number. In The Walking Dead, Sasha has proved time and time again that she was a badass shooter, who did not hesitate to put her life in danger to protect others and help her friends. In the last episodes of Season 7 of The Walking Dead, when she decided to infiltrate the enemy camp in an attempt to eliminate Negan, she commits the ultimate act of protection. His suicide saves the lives of others and surprises Negan as never before. Sasha will have fought to the end!

Regina – Once Upon A Time
Regina is certainly one of the most exciting characters in the universe developed by Once Upon A Time, notably thanks to her alter-ego, the Evil Queen. Whether in the form of one or the other, it is totally badass. In season 6 of the series, she did not hesitate to propose as a sacrifice in order to save the others of the Evil Queen. And when she found herself faced with her evil double, she decided to share her heart, love and hate, between them rather than eliminate it. If that’s not class!

Lagertha – Vikings
Do we really need to prove the badassitude of the character of Lagertha in Vikings? Through the seasons, Lagertha proved that she could climb the ladder with her courage, determination and intelligence. Now on the throne of Kattegat, she did not hesitate to assassinate the one who had taken her place, although she potentially created four dangerous enemies in doing so. In case of attack, there is no doubt that we preferred to have Lagertha in our camp!

Stephanie Edwards – Gray’s Anatomy
Some are wearing a white blouse and are not afraid to cross the flames to save a little girl. At the end of season 13 of Gray’s Anatomy, Stephanie Edwards showed how she was ready to do anything to escape the clutches of violent patients and then the fire. If we had no doubt that Stephanie was a rockstar, we now know that she is also a real heroine! Her character is going to miss us now that Jerrika Hinton left Gray’s Anatomy after the season 13 …

Bonnie Bennett – The Vampire Diaries
It is that she drooled our poor Bonnie Bennett during the 8 seasons of The Vampire Diaries! A witch with great powers, her friends often appealed to her to rectify their mistakes or help them defeat their enemies. Always ready to sacrifice herself for others, Bonnie has known her share of sorrows but has never given up. In the last season, his courage and determination did not falter despite the disappearance of his powers. No one has forgotten that moment when she is ready to die burned so that Enzo regains her humanity. She proves that it is not her powers that make her a badass woman, but her heart and her courage.