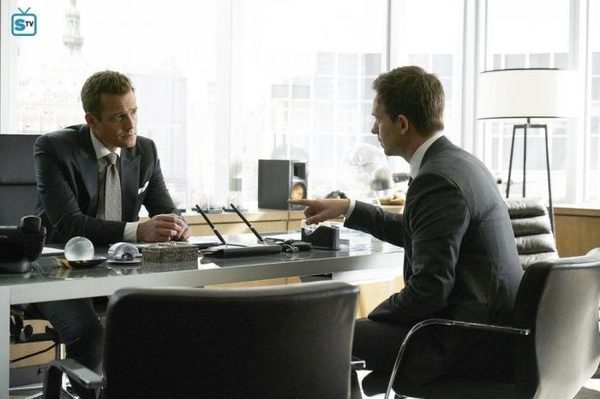 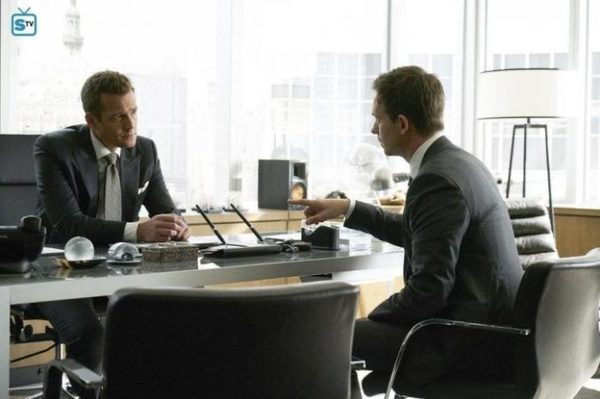 Yesterday evening the American channel USA Network broadcast the episode 1 of the season 7 of Suits. Then discover our review of “Skin In The Game”, the premiere season!

What a pleasure to meet Suits after several months of absence! It is exactly the series that we lacked to occupy our summer, light, funny and without a head. The second part of season 6 of Suits had announced us of the change and this is confirmed by the season premiere of the seventh season which redistributes the cards for the different characters. “Skin In The Game” follows the events of the last episode, while Mike is about to make his comeback at Pearson, Specter & Litt and that Harvey must now assume the role of manager of the firm. This first episode is mainly centered on the characters and their new role within the firm and we found it very interesting.

Beginning with Harvey, under his air of a man always sure of himself, Harvey shows again in this episode that he is afraid of not being equal to Jessica. He struggles to make decisions, almost lets himself through a client and is very reluctant to assume the responsibility of head of the firm. It is finally Mike and his former psychiatrist who make him open his eyes and allow him to realize that if he is not Jessica, he is equally gifted and capable in his own way. It is always interesting to see the vulnerability that lies behind Harvey’s costume and the possibility that he starts a relationship with his former therapist we like very much.

For his part, Louis struggled to take the blow of his break with Tara. He passes from being almost married and father of family to nothing and as one would expect, he manages very badly the situation. His interactions with the partners, which had started well, soon become violent and that does not stop there. He even goes so far as to verbally assault Donna and Rachel who have always been there for him. Fortunately he realizes that he is going too far and this gives Rachel a very nice opportunity who will now be in charge of the associates in the place of Louis. Finally, the one who tried everything for the whole in this episode is Donna.
Well determined to finally be recognized for her abilities and all that she does within the firm, she finally wants to be at the table of “big” and become a partner of the firm. If Harvey is reluctant at first, he finally agrees and, as Mike says at the end of the episode: “It was time!”. Donna and Rachel now have positions with great responsibilities and we could not be happier. It has been several seasons already that we find that the two women are too left out and little exploited and it seems finally to be about to change. In the end, episode 1 of season 7 of Suits brings together all the ingredients we love in the series: conversations full of references between Mike and Harvey, turnarounds and emotion. Suits is back and we love it!