The electronic cigarette responsible for certain diseases of the lung 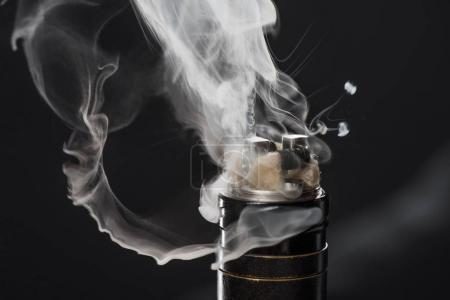 The safety of the electronic cigarette is not totally acquired. accumulate. If it is much less dangerous than tobacco, doubts persist concerning its potential health hazards. In fact, the fluids used are composed of chemicals. And one of these products, diacetyl is recognized as hazardous for the lungs.

The illness of the worker from the pop-corn

Diacetyl is used in the food industry, particularly in the United States, for the manufacture of popcorn. In fact this chemical gives the food a creamy taste, close to the butter. Inhalation of this product has resulted in workers lung disease : bronchiolitis obliterans, known as ” disease of the worker from the pop-corn “. A study published by Environmental Health Perspectives in 2015 reveals the presence of diacetyl in a majority of e-liquids. In fact, on 51 products analyzed, 39 contained at varying doses. For the time being, the researchers do not know at what threshold, the risk of developing a disease of the lungs appears.

In France, the diacetyl is prohibited in the manufacture of liquid of e-cigarettes. The French association of standardization (iso) has created standards for the production, a world first. But on the internet, consumers of e-liquid can buy products that are not manufactured in france. We therefore need to remain vigilant about the origin of these products in order to know the standards in force in the country of production, and especially have a good look at the list of components of the product.