These stylish series based on comics but without super heroes 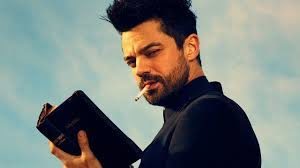 The comics is not only the super heroes and good series without masked justiciers, it is easy.

Of necessity when talking about comics, one thinks first of Marvel and DC and their super heroes. But even with these publishers, it is not only that and when we add the productions of the independents, we have super varied stories that make us forget Justice League, Avengers and company. And we inevitably find this diversity on TV, from ultra popular series to those that deserve to be more known. We take stock of the inspired series of guaranteed comics without superhero pieces in it.

The Walking Dead
Bah yeah, we start with the most obvious! At least we’re sure not to need to sell you the trick and tell you why we should watch it, because the fairly free adaptation of Kirkman’s comics remains one of the biggest series of the last few years and that c Is not ready to stop.

Outcast
With only two seasons, the series still has some way to go to reach its big sister The Walking Dead. Based on another comic book by Robert Kirkman, it is mainly reserved for those who craft the stories of occult and exorcism. We follow a tortured man with a rotten life who discovers that he is able to exorcise the demons at the same time that they are attracted to him. The series is a bit slow but the dark atmosphere is rather cool!

Lucifer
The guardian of Hell is tired of his job and decides to settle in Los Angeles and have fun. With his brother angel who wants to convince him to come back, his bodyguard demone, his shrink and above all this detective with whom he will work on murders. In a world where there is an overdose of police series, Lucifer is rather original with his biblical side and his family divorces in divine mode.

Riverdale
Inspired by the world of Archie Andrews, a super-old character created in 1941, the production of the CW is the teenager series par excellence. She has modernized Archie and Company and with a second season in preparation, Riverdale has not finished talking about it.

Preacher
We kept the best for the end with this quality production. Irreverent, thrashy and funny, the series is as special as captivating and profits from comics very adult and complete wtf. A casting of madness, of the absurdity and the bizarre with each new scene, and its season 2 currently in circulation, it is really a small pear not to be missed.