Transformers 5 – The Last Knight: Laura Haddock, “I loved doing my own stunts!” 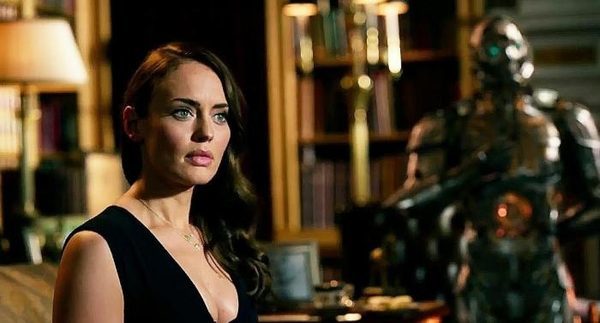 After Mark Wahlberg, it’s Laura Haddock, who plays Vivian, one of the new female characters in Transformers 5: The Last Knight, to answer our questions!

Who says ” new opus ” of the franchise Transformers says ” new characters “. Of course! And this time, it is especially on the side of female roles that we must look to find a little renewal. Vivian and Izabella, who are part of the new protagonists introduced in Transformers 5: The Last Knight , occupy two places left by Tessa Yeager (Nicola Peltz), Cade’s daughter party exploring other horizons. And today, it is Vivian that interests us. Or rather his actress, Laura Haddock, who, having played Meredith Quill in the two films of the Guardians of the Galaxy , arrives on the same level in the impressive world of the blockbuster! Especially as Vivian, Professor of medieval history at the university, is also immersed in the action alongside Cade Yeager (Mark Wahlberg) and the Autobots. So, of course, the shoot had to be both physical and … stunning! Melty was able to interview the actress to ask her about the film, her character and her collaboration with Michael Bay.
You played in The Guardians of the Galaxy but you had a small role. So, what is it like to be on the set of a movie as huge as Transformers 5: The Last Knight when you’re not used to it?
Yes, it was huge! When I arrived for my first day on the set, I suddenly realized how huge it was. But it quickly becomes your daily life. Everyone welcomed me warmly and we quickly come to form a family, especially when we are far from home. But even then, there were days when I had to pinch myself and say to myself, ” My God, it’s just huge! ”
Is there a particular moment that marked you more than the others?
Yes, I remember that enormous platform that was used in Detroit, which was raised by pumps and stilts and that one could tilt on one side or the other according to the scene that Michael [Bay] wanted to film. Michael enjoyed filming at a specific time of day, when the sun was very low in the sky and the light was beautiful, and he quickly made us climb onto the platform and propelled us towards the sky. And I remember watching the city of Detroit, watching the sun go down and watching the movie team, and I remember thinking, ” Wow, it’s really amazing! ” I have a few memories of this kind, but this one is really the first one I keep in mind.
What attracted you to the character of Vivian? His rejection of convenience?
When I read the script and discovered Vivian, I was very interested in the fact that this character exists in the film. Because there are all these robots, all these explosions, and all the crazy things that happen around the Transformers and, in the middle, there is this English professor who specializes in medieval history and is so well educated. She is strong and independent, and she is very happy to be single. And she finds herself in the middle of it all! I was really intrigued to see how these two elements would get married to each other. And of course, it is a necessary element to safeguard the world. And it’s great! I think it’s important to have a female character who is very strong, as strong as the men in the film.
Vivian is going through a lot of hardships in the film, did you have to realize some of the stunts of your character yourself?
Yes ! Michael likes his actors to do some of their own stunts. If we think we can do it, then he wants us to do it. I worked closely with my liner, Jessica Harbeck, who is absolutely incredible and without which I could not have achieved half of my stunts. She guided me through all the steps. But I loved realizing my stunts! I’ve become addicted to it because it gives you such an adrenaline shot. I was able to learn a lot of other abilities, we did so much stuff with harnesses that I felt like I was constantly harnessed to something and swinging endlessly at a wire. But I loved it! Are you looking forward to getting to know Vivian?