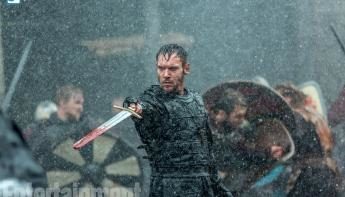 While waiting for the release of season 5 of Vikings, discover the official photos of the series History! Travel, action and violence to be foreseen.

Vikings will soon be back on our screens. The shooting ended in May after a year of travels in Ireland, Iceland and even Morocco for the actors of the series! Clive Standen (Rollo) recently confirmed that Vikings’ season 5 will land before the end of the year, so we will have to wait a long time … Luckily, after a trailer of the most tempting, we just To discover the official photos of season 5 of Vikings! At the rendezvous: trips, action and a lot of violence in the next episodes.

Season 4 of Vikings ended in the biggest suspense: King Aelle and King Ecbert killed, the sons of Ragnar celebrate their victory. While Ivar declares war on Lagertha and wants to become a leader, his brother Bjorn rallies troops to leave on the Mediterranean. After an umpteenth excess of anger towards his brother, Ivar kills Sigurd in cold blood under the shocked glances of the Vikings present. Well, know that this violence is not ready to stop, as the photos confirm. In season 5 of Vikings, Ivar will always be in search of vengeance and war, while Bjorn will realize his project. We see him traveling the desert with his companions. And little bonus, we see the new character of Vikings, Heahmund, who will be the great rival of Ivar in the next episodes! We are eager to find the History series on our screens.