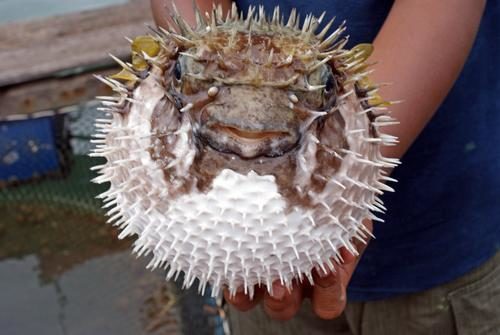 The Japanese consume it since the dawn of time. It is the emblem of the fish are dangerous as a carrier of a deadly poison, the tetrodotoxine, which has no antidote. But if it is prepared in the rules of the art and by a chef specially trained for this task (it is necessary to remove the liver and gonads), the Fugu does not pose a health problem. This is not always the case of its congeners dangerous, around the world.

The hit parade of deadly venoms

Among the deadly venom that one might encounter in the sea, there are those that may be encountered in diving, such as the one in the Striped Knit, a snake, non-aggressive, but the venom is ten times more powerful than the cobra, and therefore deadly to humans, and those jellyfish murderesses of the Philippines. There are also meetings inappropriate, such as with the sea urchin flower of the tropical regions and the one with the Conus, a snail that can still be found in the Mediterranean, or the one with the famous fish-stone, the Stone Fish, placed at the bottom of tropical beaches, looking curiously like a stone, hence its name.

A side of deadly venoms in situ, there is also the venoms of fish that one is likely to find on his plate. It is well known to all those who have made a time in the west Indies. The discovery of a recent case in Martinique has led to a decline in fish consumption in the island. People are hesitant now when it comes to buy. However, there is not much to fear in this area of the Caribbean.
This is not the case in many countries : there are more than 400 species contaminated by this micro-algae whose consumption can be fatal. Including fish that are highly prized, such as the barracuda, trevallies and groupers, which are now banned fishing in all the islands of the Northern Antilles. 50 000 persons are infected each year in the world, which makes it the most important intoxication by the products of the sea at the international level.
There is no means of detection. The only attitude is to trust the fishermen. As we trusted the chef to the fugu.

Intoxications the consumption of certain fish

The fugu is a fish with a deadly toxin without the antidote known at this day that the Japanese love and which derives its celebrity from its dangers but also its taste, very particular. Why this paradox ? Probably because of the “thrill” of the risk is perfectly controlled, in this ” roulette wheel japanese “… But most of all, because of its taste absolutely remarkable and unique, as specialists from this millennia-old tradition of the consumption of raw fish. The tingling sensation on the lips due to an infinitesimally small amount of poison will add to the enjoyment of gourmets.
This tradition of raw fish, sushi and sashimi, is invading our city centers, and pose problems in more down-to-earth poisoning conventional unpleasant than life-threatening. But there is also the risk of getting a glass, the anisakiase, which will nest in the wall of our stomach to cause a state of unpleasant complications.

An exception playful : the Fugu, the ” black star “

The Japanese love it and are willing to pay a very dear to offer his delicate flesh. But if the fish is improperly prepared, it is the death… These are the foundations of the folklore surrounding the fugu in Japan.
It is a fish which is very abundant and so very consumed for more than 2000 years, by the Japanese and the Chinese. In that it has resulted in countless deaths, requiring the training of cooks experienced to continue its consumption. Thus, there is an art of preparing fugu. Highly codified, but that requires an absolute trust to the cook.
In reality, it is risky, but this is not very complicated. Just peel the fish and remove the fillets of fugu, yet living, taking care not to pierce the liver and gonads. It is in these bodies that we find the poison. The flesh of the fish becomes perfectly edible.

We understand that the care of the artist, a chef does not necessarily equate with that of the large-scale distribution. It is the presence of fugu ill-prepared at a supermarket japanese that comes to elicit a wave of emotion that was yet to subsided for thousands of years.

To learn more, there is an excellent folder on the site ” eating “. Read and enjoy !