World cup 2014 : the doctors of the FIFA questioned 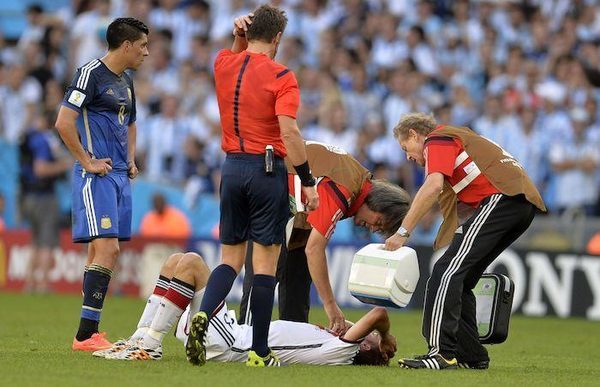 Christoph Kramer knocked out in the final (PIXATHLON/SIPA)

The sports doctors of the FIFA’s concern. According to a team of neurosurgeons canadians, they have missed many cases of concussions during the 2014 world Cup, held in Rio de Janeiro (Brazil).

After reviewing all the matches of the competition, doctors from St Michael’s hospital of Toronto (Canada) are clear : 72 collisions would have been subject to a careful examination. This was not the case, complain that they in the JAMA.

64 meetings, 12 stages, 32 countries… In naming Brazil host country of the 2014 world Cup, FIFA has seen things in a big way. But the federation has not been as ambitious in its medical practices. On paper, the rules were, however, promising.

In accordance with the international recommendations, FIFA has decreed the removal from the field of any player exhibiting signs of a concussion. Loss of consciousness, headache or reaction time slowed down had to be alert to. On the edge of the field, the doctors had to take the relay, and confirm whether or not the incident.

Only, the medical team has shown little rigorous in the facts. Watching the entire matches, neurosurgeons have observed 72 collisions between two heads. It is far more than the 19 injuries reported by the doctors of the FIFA during the competition. The German Christoph Kramer is without doubt the most eloquent example of this laxity.

Knocked out by a shoulder move during the final against Argentina, the defensive midfielder collapses. It comes out of the ground than fifteen minutes later, haggard, supported by two healers. A few days later, he admits to having forgotten the entirety of the first half and did not remember how he returned to the locker room. Despite the evidence of a concussion, he continued to play. Up to the victory. The examples are unfortunately numerous, and have aroused the wrath of the union representing the professional players.