France will not escape the flu and a few uncomfortable truths 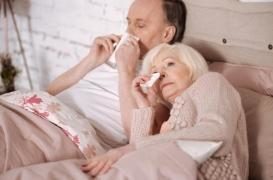 The influenza disease is a fatal disease

Sorry but you have to start by this…

In France, influenza affects each year between 2 million and 8 million people and causes between 1500 and 2000 deaths, mostly among people over 65 years of age, the most fragile. This is why they are encouraged to get vaccinated

The main treatment of an epidemic is the ” quarantine “

Since that man undergoes in epidemics, its main response has always been the eviction. The flu remains infectious to others for up to five days after the onset of the first signs in adults and seven days in children.

It is the main mechanism of contamination, but it can also be done through hands and objects contaminated by droplets of saliva (door handles, tables, etc.). It is important to isolate the infected individuals, leaving them at home, but also to follow the recommendations of hygiene to prevent the spread of the virus :

This is also true for frail people :

The flu has nothing to do with a heavy cold

Many respiratory viruses are different from the flu circulating at the same time as the influenza virus in the population. They can cause signs very similar to those of the flu.

A lot of people say “be seized” as soon as they are suffering from a fever with sore throat and cough…) and it is difficult for you to make “true” and “false” flus without a throat swab for virus analysis (which is not systematic).

But there are two things which do not mislead :

1 The real flu makes those who suffer very sick, even the healthy.

The sudden onset of signs, as well as the great physical fatigue and muscle who attended are in favor of the flu.

2 generally we suffer from the flu when it comes to an epidemic. And then the diagnosis does not pose problems

The true flu is caused by a virus. And never the antibiotics have effect on the virus.

To combat the fever and muscle or joint pain, it is possible to take paracetamol by spreading out the doses at least 4 doses per day and by adapting the dosage to the age and weight.

It’s useless to put at the bottom of his bed under a pile of blanket if shivering.

The flu gives you a fever and pain and may cause dehydration.

It is necessary to avoid adding heat to the fever : wear light clothing and avoid duvets, quilts and comforters, which may especially exacerbate dehydration : sweating has never improved the flu.

The patient should rest and, in cases of fever and severe, it is important to drink regularly to avoid dehydration, especially in infants in which it is necessary to propose a small bottle of water at will.

It’s the flu that fatigue, not drugs!

It is normal to be tired and uncomfortable in the case of flu, and especially after. It is not always necessary to call the doctor who is often overwhelmed in periods of epidemic. But he should not hesitate to call the doctor in certain risk situations :

Or if the flu seems to be very aggressive :

If there is a sudden aggravation, and in the absence of improvement within 72 h.

There is not a flu but the flu

The peculiarity of the influenza virus is that it changes every year : mixing with influenza viruses of animal origin, the virus modifies the proteins that are expressed on its surface (” hémaglutinine ” and ” neuraminidase “, which means that it is not, or extremely poorly, recognised by the defence systems of the organism (antibodies and white blood cells). In the case of a minor change, it is an epidemic more or less strong. In the event of a major change, it is a pandemic with very serious risks.