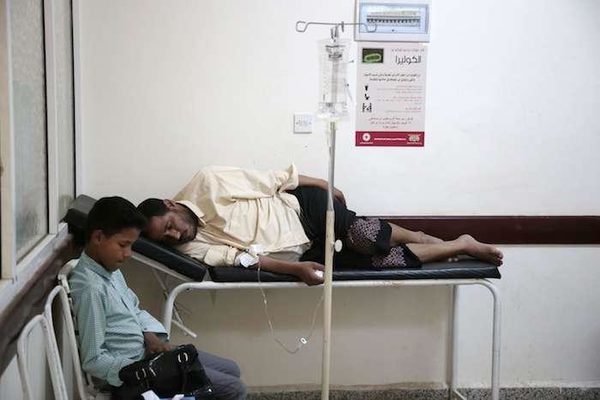 The number of victims of the cholera epidemic in Yemen continues to climb. Since the end of April, more than 1,600 people are dead and nearly 276 000 would have been infected. Almost all of the country is affected. “This is the worst cholera epidemic in the world,” said the world health Organization (WHO) last week.

In his last point the epidemiological, the united nations agency states that children under 15 years of age account for over 40 % of the cases. The more than 60 years account for a third of all deaths.

This diarrhoeal disease is due to ingestion of a bacterium called Vibrio cholerae. It is found in water or food contaminated by human feces. “In the absence of treatment, death occurs in 1 to 3 days,” said the Pasteur Institute on its website.
Having access to clean water is, therefore, essential for halting the epidemic. However, the war destroyed the infrastructure health and sanitation of the water. More than 14 million Yemenis do not have access to safe drinking water.

To alleviate this situation, the WHO and NGOS such as Doctors Without Borders and the Red Cross sending tons of chlorine to sanitize the water. Their shipments contain drugs, rehydration salts and healthcare beds. Dozens of treatment centres have also been constructed to accommodate and isolate the patients.

“The biggest challenge is to reach the population, says Christian Lindmeier, spokesman for WHO. A logistical effort important has been made, but people now need to know that they can come here.”

It must be said that needs in the country are massive. According to the WHO, 19 million Yemenis are in need of humanitarian assistance. In addition to the medical care, the population is in the grip of a famine.
Today, however, the cholera epidemic focuses the efforts of all actors in the field. “Humanitarian organizations have had to direct their resources programmed in the fight against malnutrition to the fight against cholera,” said Jamie McGoldrick, co-ordinator of humanitarian affairs of the UN to Yemen during a point-release to Sana’a, the capital of Yemen.